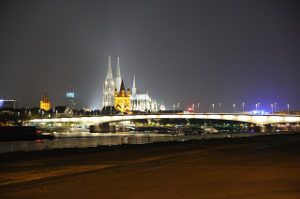 Cologne is one of the largest cities in Germany and split into 9 larger neigbhorhoods.

Cologne is best known for its beer, and for its cosmopolitan and tolerant attitude towards different ideas, religions and peoples.

The city is also a center for art and culture, hosting several major art and music festivals. Cologne is divided in two by the Rhine river.

We will let you know about the best Neighborhoods to live in Cologne, but first let’s give you an overview of all neighborhoods in Cologne.

The Innenstadt of Cologne, also known as the Ring, forms the center of the city and it is a busy commercial district with many shops, clubs, restaurants and cinemas.

Walking through the famous Belgian Quarter you can find stores that sell anything you could possibly want, from clothing to used books.

With the best location for commerce and entertainment, Cologne Innenstadt is not a cheap place to live, but if you want to experience living in a vibrant city, with many hip cultural places to visit, and a wild nightlife, an apartment inside the Ring is worth the extra money.

Lindenthal is located west of the Ring, and it has small shops and lot’s of green areas that make it a quieter place to live than the Innenstadt.

Lindenthal also has a vibrant student population and is the location of the campus of the University of Cologne.

From Lindenthal you can simply walk to downtown Cologne, or sit and enjoy a cup of coffee or a beer in one of the many cafés and bars located there.

Being close to the Inner City, Lindenthal is a popular place to rent an apartment.

The prices are more affordable than in the inner Ring and the neighborhood also offers its own sources of entertainment, shopping and an exciting nightlife.

Nippes is another place to look in, if you are searching to find an apartment located close to the inner city.

It counts with a good communication network and has both train and U-Bahn stations, so that you can easily go to the center of the city or travel outside of it fast and comfortably.

Nippes has a nice café and bar culture on its streets and boulevards, but it doesn’t have a nightlife as active as the Rings.

It has good shopping places and its Turkish grocery stores and markets are just some of the manifestations of the diverse cultures you’ll find in Nippes.

Beautiful parks allow the local residents to exercise and enjoy nature among the modern city.

Rents can vary from the expensive to the more affordable, with the most northerly areas generally having the cheapest prices.

Located to the northwest of the Innenstadt, Ehrenfeld is one of the most popular residential areas in Cologne, and has many busy shopping streets and good restaurants and bars.

Ehrenfeld is a famous clubbing destination in the city, with many of the best dance clubs, and also live music venues for young people, where alternative music is played, such as in the popular Live Music Hall that hosts concerts and parties.

It also has a lively cultural scene for the liberal youth of the city, with good theaters and cinemas.

Many artists house their studios in Ehrenfeld, and the neighborhood is also the location of many important film studios.

Ehrenfeld is an ideal place for young people who want to live in the middle of the hottest clubs of Cologne.

The suburb of Rodenkirchen is located outside of the busy commercial center of Cologne, and it is a popular residential area for families and people looking for single-family houses or large apartments.

Rodenkirchen is surrounded by the Rhine river on its eastern quarters, providing a great place to walk and beaches where the locals gather to take sun, or play a game of soccer, while enjoying the beautiful scenery.

Rodenkirchen is a fairly conservative place, far from the noisy club scene of the inner Ring districts, and offers a quiet environment and good houses with prices that vary according to the quarter in which they are located.

Now that you know your way around Cologne why don’t you try out one of the best things to eat in Cologne?