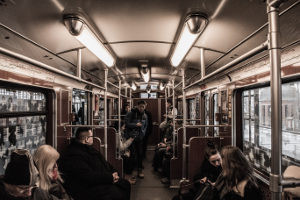 Located in the heart of Germany and functioning as a transport hub for much of the European Union, Frankfurt has developed a complex transport system to handle tens of thousands of passengers each day.

The city of Frankfurt is served by a modern public transport system designed to move thousands of workers in and out of the city’s centre everyday.

Public transport in Frankfurt is made up of modern rail and bus transport whose traffic is expertly orchestrated by the transit authorities with typical German efficiency.

Public transport in Frankfurt is managed by different public and privately owned companies but it is integrated by the city’s transport association, allowing passengers to benefit from a unified ticket system and easing the coordination of timetables for buses and Bahn transport.

Frankfurt offers different discounts and special passes that allow passengers to save money, and due to the traffic jams that form in the rush hour, even many car owners choose to take the train to work and benefit from its speed and efficiency.

Residents have not been the only ones who benefited from this revolution, tourists have also been included with the creation of the Frankfurt Card, which allows them to travel free of charge in any public transport medium.

The efficiency of Frankfurt’s public transport is largely the result of decades of careful planning and an increasing involvement of the public sector in the development of transport in Frankfurt.

The city’s public transport is run by the Frankfurt Transit Company (or VGF for its initials in German) who owns the Bahn cars, trams, and buses, although currently there are discussion of breaking up its monopoly over bus routes in favor of private bus companies.

The VGF is the organ responsible for standardizing the fares, creating timetables, and running the buses and rail cars. Created in 1995, the VGF has allowed for the expansion of public transport and help relieved the busy streets from traffic by attracting increasingly more drivers to use public transport.

The city’s public transport network is composed of 9 S-Bahn lines that connect the centre of the city with the Rhine Main Region, 9 U-Bahn lightrail lines inside Frankfurt itself, 10 urban tram lines, and several bus lines that connect different rail lines.

The Bahn lines mobilize the majority of the passengers and has largely overtaken the bus as the most important public transport medium.

Trains arrive regularly at 3-10 minute intervals depending on which part of the city you are, with the shortest one being 3 minutes in the downtown area.

Trams are even faster and have more stops than Bahn lines.

Trams are also popular medium of transport in the city and specially in neighborhoods that have less transit.

During the night bus lines take over the service from tram and bahn cars, between 1:00 AM and 4:00 AM when they start working again.

A great alternative medium of transport is proportioned by the public bycicle renting system Call a Bike, offered by the rail company Deutsche Bahn.

This allows people to rent a bike in any part of the city where a renting point is located, including any of the rail and Bahn stations.

By calling their phone number they provide you with a special code that allows you to unlock the bike’s lock and use the bike for just 0.06 euros per minute or 15 euros if you want to use it the rest of the day.

When you’re done with it you can just return it in any other Call a Bike renting point.

The city counts with many cycle tracks which are separated from the motor traffic lanes, therefore safeguarding the cyclist from accidents.

In addition to this, cyclists are allowed by law to go through jammed one way streets in both directions, making cycling an ideal escape from the crammed trams and buses of the rush hour.

Like other modern German cities Frankfurt has adopted a unified fare system to eliminate the need of using multiple tickets for a single travel.

Instead you can buy a single ticket for that ride and that is valid for your whole route, even if you have to commute to another line or change your transportation medium, like from a tram to a bus.

You can also buy single day tickets, weekly tickets, monthly tickets, and even tickets that are valid for a whole year. The longer the ticket is valid the more you save in your transport expenses.

You can buy tickets in any train, tram, or bus stop and even inside most buses and bahn cars which carry vending machines in them.

The junction for buses during the night is located in the city’s center, in the Konstablerwache square, where all the buses start and end their route.

When using the Bahn system its important to know that even if there are no turnstiles or any other methods of control in the train stations every now and then controllers dressed in plain-clothes do surprise checks inside the cars to catch anybody who maybe riding without a ticket, so make sure to keep your ticket always at hand with you or you may have to cancel the 60 EUR fine.

Frankfurt is a magnet for tourists and has developed its own special pass for them.

The Frankfurt Card allows tourists a free ride through any medium of the city’s transport network, and includes many other discounts for touristic places like museums and theatres, bus and even river tours.

The card can be bought for a single person or a group that includes up to five people of any age.

You can buy your card in travel agencies, tourist information offices, at the airport, or just get it online from frankfurt-tourismus.